When we told most people about our plans to add four new children to our already large-by-American-standards family of six, their eyes became wide as saucers. Adoption is challenging no matter what kind of adoption it is – special needs, baby, toddler, older child, sibling group, etc. But to take on a sibling group of four is insanity, at least that’s what lots of people told us. They were probably right. But in our naivety we truly believed we could manage the challenge with great levels of success. 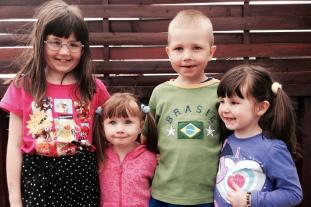 But our challenge, little did we know, was a bit more unique. You see, we already had a sibling group of four in our home. These four kids were relationally close to one another and to us. Now, though, we were getting ready to bring a completely separate set of siblings, just as relationally close to one another, into our family. Our job was and is not only to navigate the waters of adoption itself, but also, with God’s divine help, to integrate an established sibling group of four into another established sibling group of four. A nearly impossible task. Because of this challenge, agencies and international adoption communities informed a rule (at least in Poland) which required the oldest child in a sibling group to be the youngest child in the adoptive family. This would mean our 10 year old would have to be the youngest child in our quiver. This rule is so strict our agency did not believe we could get approval to adopt the sibling group we felt called to adopt. Our two older biological children would remain the oldest in our family, but the oldest in the new group would now become third oldest in our conglomerate. The rest of the children would slip into various slots along the timeline of birth order. Surprising all of us, Poland obviously agreed, and our birth order (or pecking order) became dislodged.

We are certainly not the first to do this, nor will we be the last. We have most assuredly faced many challenges because of the birth order paradigm. People are always asking us how this phase of our family life is going. I thought I’d take a post here and share some of the challenges we have/are facing as we work to meld two completely separate sibling groups into one bonded group of kiddos and what we are attempting to do about it.

1 thought on “Becoming ONE: Obstacles & Solutions to Blending Sibling Groups”